Why talk of “crisis?” 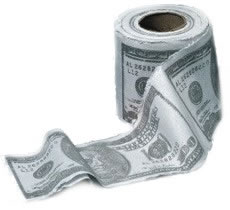 We want to attack a certain discourse, the dominant discourse of the crisis, which explains to us that its causes lie in bad, finance capitalism. We think the financial crisis is just a symptom of another. In reality what’s at stake is a crisis in capitalism itself. The consequences of this crisis will be terrible, but they might also put capitalism into question—or rather, become the occasion to do so—down to its very foundations.

From the far right to the far left, you hear the same discourse everywhere: the “real economy” is a healthy thing, it is even healthy—it’s just that the finance sector has gone completely out of control and endangers everything.

In more overtly conspiracist variants, the crisis is just a pretext, the machination of capitalists and investors who are doing better than ever. In fact, these big liars have a treasure-trove, well-hidden, that we must locate! and afterwards redistribute to the poor! Thus, on the left and the right, everybody reclaims the elimination of tax havens! Find the hidden money, re-inject it into the State and its programs…

The discourse varies, too, depending on whether one blames the investment bankers, the investors, or the rating agencies—which amounts to blaming the thermometer for the fever. But above all, “it’s finance’s fault—plus the national debt.” “How to Confuse the Symptom and the Disease.”

It is impossible to separate good, productive capitalism from bad, finance capitalism. There isn’t, on the one hand, an economy that produces wealth, and on the other, a virtual economy, a parasitic finance sector; these are two faces of one reality. Since its beginning, the capitalist economy has been unable to function without finance, without credit, stock exchanges, speculation.

Our national managers are making fun of us when they call for more strict regulation of speculation, because the whole system, in its present phase especially, needs speculation and credit. The causes of the crisis aren’t on the side of speculation, nor on the side of debt. The recent financial tumbles—the subprime crisis, the sovereign debt crisis, the rating agencies, the threat of bankruptcy of states—are just the expression of a crisis in capitalism itself.

Basically, capitalism is confronted by a recurrent contradiction: on the one hand, it must diminish (or anyway, limit) salaries in order to keep overhead low and maintain high profits. On the other hand, consumers must have enough revenue to buy the commodities produced.

After World War II, in Western Europe, North America (minus Central), and Japan, rapid expansion of the economy made it possible to minimize or postpone the negative effects of this contradiction. Salaries went up, but production grew even more. Many sectors that weren’t previously part of capitalist production or consumption were incorporated, just as today education, health, or security are being “privatized.” Through industrialization and mass production, a swarm of products, at lower prices, was offered to the proletariat without relinquishing profits. In order to develop productivity in this way, it was necessary that consumerism invade all of society: advertising, manipulation of desire, production of a mass of crap to satisfy socially created needs.

Elsewhere, what was then called the third world was maintained under colonial or post-colonial domination, which permitted the exploitation of its raw materials.

Everything changed since the crisis of the 1970s and the restructuring of capitalism it provoked. The outsourcing of industries and services have allowed the cost of labor to be lowered globally. Consumption has been maintained by the development of credit, in the form of both private debt and public spending (thus public debt). But the system is short of breath, as the crisis, begun in 2007, has demonstrated. Not even a massive expansion of sovereign debt has been able to overcome the crash of 2008. This expansion of debt, which will be impossible to pay off, is the concrete expression of an impasse. The public debt crisis in Europe and the prospects of a Greek default, now very real, are the proof. Finance is not the cause of the crisis; finance is, on the contrary, what has permitted capitalism’s recurrent contradiction to postpone its explosion for so long.

Today, this contradiction strikes states in the form of a budgetary crisis and diverse austerity programs. All over Europe, it is explained to us that we’re above our means, that we are going to have to work harder and tighten our belts. In this situation many are turning towards the state, hoping that it will impose limits on the “excesses of the market.”

“With more State to regulate finance, we will be able to construct a more social and more prosperous economy.” But the anti-liberal solution meets an obvious obstacle[1]: the state isn’t opposed to the sphere of the economy. Its relation to the economy is one of total interdependence. The reason is simple: it needs money to finance its own projects. Economic downturns limit and suffocate the State. With the loss of its financial means, the State is reduced to the management, always more repressive, of poverty.

States today have a choice between two politics: draconian austerity or monetary creation, that is, printing more money. The first leads to violent recession, the second the the explosion of uncontrollable inflation.

Unemployment increases; poverty, and barbarism too, threaten to spread dramatically, maybe punctuated by a couple phases of economic recovery.

But what’s the use of this disillusionment? Why hammer on the fact that the crisis that started in 2008 might get worse? Why are we so happy about it, when we’ll suffer its consequences later, and we’ll be the first ones affected? Capitalism has shown itself perfectly capable of overcoming crises up to now; what threat could a crisis pose to a system whose state has been “permanent crisis” up to now?

In fact, there’s no contradiction between saying that the crisis has grown deeper these last years and saying that capitalism is, in a way, a permanent crisis: the crisis can be analyzed at once as a mode of ordinary functioning of capitalism and something that potentially puts in question its very existence. Capitalism is that game that includes its contradiction in its own rule, and which, therefore, could tend towards its own abolition. But it’s up to the class struggle, it’s up to us to do it.

This crisis might be resolved the traditional ways, which have worked before in similar contexts: war(s), massive destruction of the means of production and of the labor force. It might also turn out to be a much longer process of continual impoverishment for the majority of us, punctuated now and then by desperate explosions, conflicts of all against all (competition between groups, racism…)

But one could also think that, during a prolonged and serious crisis, social automatisms and habits weaken and disappear. People might be in a position to question what they had considered natural or inevitable up till then. Crises are potentially moments in which capitalism is put in question.

So why does this analysis, which is basically the only one that our recent crisis confirms, get so little attention? Why is it so difficult to admit today that our system is out of breath? Above all it’s that nobody can really imagine the end of capitalism. Even the idea is cause for panic. Everyone thinks she has too little money, everyone feels threatened. But it’s money itself,  the commodity itself, work itself, property itself, the State itself, that we must attack.

The passing of this society represents such a shock that it’s not lightly imagined. But we aren’t condemned to try to save the economy that stumbles and, stumbling, crushes us. We can contribute to its disappearance. Not out of nihilism, but for a world without State and without classes, a world for all, without exploitation, without domination.

[1]  Critics of deregulation dream of going back to a state that protected them from capitalism. But it can’t protect them, because its function is to assure capitalism’s good functioning. In these conditions, their politics leads basically to new forms of economic patriotism, protectionist measures, attempts to hinder outsourcing, if not to outright nationalism.